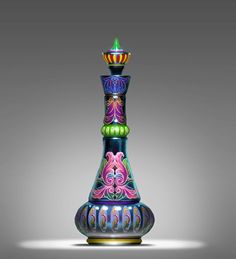 “When I was a little girl, I was flipping through the television and discovered that old show ‘I Dream of Jeanie’. Have you seen it?”

“Yeah, sure. Hot blonde in the genie costume.”

“Of course. A hot blonde dressed like a belly dancer, very risqué for the era,” she laughed. “She would nod her head like this,” she bobbed her head in simulation, “And flip that pony tail and bam – magic would happen!”

Penny starred off in space with a slight grin. “When I was a little girl, I wanted to be Jeanie so bad. So bad that I even told my mom about it, and of course she misunderstood me completely. She thought I wanted the magic powers, the instant gratification. Or maybe the handsome military man barking orders at me? Which again, just shows how clueless she is.” She rolled her eyes, then looked back at me and turned somber. “But it wasn’t the magic powers, it was the bottle I wanted. Remember the bottle? The cozy circular room with all the pillows? She could escape down into that bottle and relax and be left alone. I wanted a bottle like that so bad. A bottle to hide in, and . . . just be left alone. Free from the chaos and problems she created, you know?”

I nodded. I understood.

“Ha. I know. I was just a girl and already fantasizing about escaping into a bottle. I get it. Self-fulfilling prophecy. The irony is not lost on me.”

It wasn’t lost on me either.