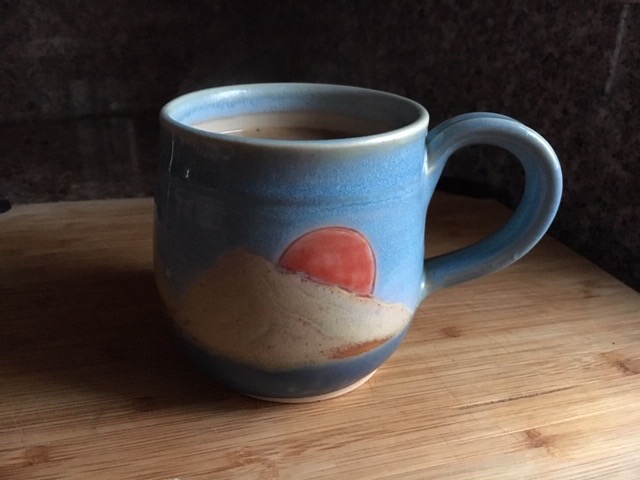 I paid $ 20.00 for this cup – money well spent. Of course I already owned several coffee cups, but this one is special. I put the cash straight into the hands of the artist who created this, and supporting artists is something I never regret. It is a lovely cup. The curvature fits my hands perfectly. And most important; it came with a story.

I was in Bishop with my pal Erin when we found an “Artists’ Market”, which consisted of five easy-up tents on a dirt lot off the main drag. I was a little disappointed there wasn’t more to see, but I was able to slow down and talk to each artist. As I said, I wasn’t in the market for a new coffee cup, but this is what I chose to buy.

The cup features “Tom Mountain.” If you’ve driven North on the 395, it is the giant mountain between Bishop and Mammoth. Yes, there is a mountain range on either side, but Tom Mountain is impossible to miss. It looks like the quintessential mountain, as it stands out in front of the rest of the Sierra’s as you head up the Sherwin grade. It is  shaped like a candy kiss and is featured in many of my vacation photos throughout the years.

The artist’s husband died on that mountain. She kissed the cup as she told me about the cross-country-skier-mountain-man who died in an avalanche. She spoke of him with grief and affection, but she also pointed out her new husband, ironically named “Tom”, who helps her with her pottery.

I think about her often, since I drink from this cup daily. Her story doesn’t make me sad. It was a tragedy, but also a story about new beginnings. She grieved and persevered. She remarried. She thrives today. His life ended, but hers went on. Fairness is not even a consideration. The sun over the mountain makes me think of each day as a new beginning.

The mountain makes me think of her husband, and how life can end suddenly and unexpectedly. It is scary, yet he was doing what he loves to do. It’s a good thing to think about over coffee. I’m not being morbid, I believe this. YOLO, “You only live once” is the catch phrase of millennials, and known for being used at self-centered justification. But as trendy and overused as it may be, the statement is true.

I think about them both; death and new beginnings. The sun and the mountain. Coffee, art, and storytelling, as I drink from the cup that fits me perfectly.